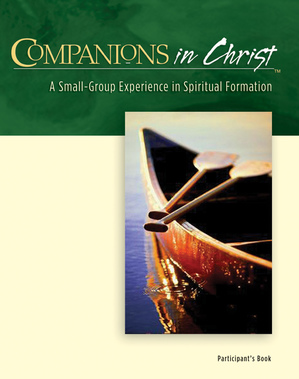 A revised Companions in Christ Leader's Guide, containing a "Getting Started Guide" and new plans for a closing retreat, is also available.

This Participant's Book is recommended for groups that will continue their study together for the full 28 weeks.

Companions in Christ offers a powerfully transforming small-group experience in opening yourself to God's presence and guidance. Explore classic spiritual practices, and develop new daily patterns that will open your life to a deepening relationship with God and with your group.

ALTERNATE OPTION: Also available are separate Participant's Books for each of the 5 topics mentioned above, which gives your group a chance to take a break between study modules:

Rueben P. Job (1922?2015) was a retired bishop of the United Methodist Church and former World Editor of The Upper Room. A pioneer in spiritual formation for his denomination, he wrote numerous books on the spiritual life and developed several spiritual enrichment programs. Bishop Job and his friend Norman Shawchuck coauthored A Guide to Prayer for Ministers and Other Servants as a result of their own hunger for God and for a resource that could be their constant companion on the journey toward a deeper and more consistent relationship with God. This was the first in the four-volume Guide to Prayer series. A native of North Dakota, Rueben and his wife, Beverly, made their home in Nashville, Tennessee.

Marjorie J. Thompson is an ordained minister in the Presbyterian Church (USA). She has served as director of the Pathways Center for Spiritual Leadership and as spiritual director to Companions in Christ, a program outgrowth of the Pathways initiative of The Upper Room. Companions in Christ is a series of small-group resources for spiritual formation in local congregations, suited to ecumenical use. Marjorie has exercised a ministry of teaching, writing, and spiritual guidance for many years.

Wendy M. Wright holds the John F. Kenefick Chair in the Humanities at Creighton University in Omaha, Nebraska. A noted writer in the field of contemporary spirituality, she has published articles in Weavings and other leading journals of the spiritual life. Wendy is the author of several books, including a trilogy on the seasons of the Christian year for Upper Room Books: The Rising, The Vigil, and The Time Between.

E. Glenn Hinson teaches in retirement at Lexington Theological Seminary, Louisville Presbyterian Seminary, and the Baptist Seminary of Kentucky. He is a member of the adjunct faculty of the Academy for Spiritual Formation. Dr. Hinson is a widely published author of books, articles, and reviews in the fields of New Testament, patristics, ecclesiology, spirituality, liturgy, and Baptist history.

Adele J. Gonzalez is associate director of the Office of Lay Ministry of the Catholic Archdiocese of Miami where she works in the areas of Adult Christian Formation and Ministerial Training of the laity. She is also an adjunct professor of theology at Barry University in Miami Shores. She is a spiritual guide, retreat director and nationally known speaker on topics of spirituality and lay ministry in multicultural settings. She lives in community as a lay associate with another associate and a Sister of Saint Francis from Stella-Niagara, New York.

Gerrit Scott Dawson has been the minister of the First Presbyterian Church of Lenoir, North Carolina for thirteen years, learning the joy of the "extraordinary ordinariness" in the long-term pastorate. He is married and the father of four children. Thankful that each year's rhythm includes a contribution to Weavings, his most recent book is the forthcoming Jesus Ascended: The Meaning of Christ's Continuing Incarnation.

What Readers Are Saying

"Companions in Christ has really helped me and my group visualize our place in God's kingdom. It's not just a course. The length of it makes it a practice or way of life. We are praying more, listening to God's Word and listening to God speak to us. It is definitely changing our lives as we become more active and obedient to God's will."