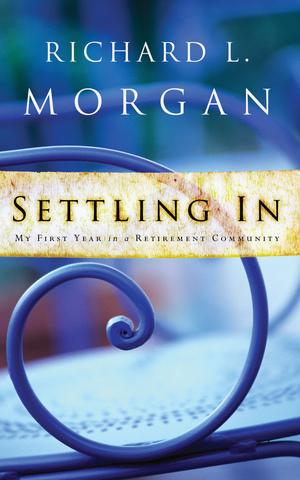 My First Year in a Retirement Community

Richard L. Morgan has carved a niche as a bestselling author and an authority on older adult ministries and concerns. Now, he chronicles his own transition to a retirement community.

Morgan speaks frankly about the losses and realities as he approached his own not-yet-frail "fourth quarter" (after age 75). Drawing from his journals of those sometimes-agonizing months, he takes us through his decision to move to a long-term facility and the first year of settling in.

"The retirement community became my home, and I must confront the inevitable illnesses of old age … every day," Morgan writes. "While I could not minimize the difficulties and issues I faced in this new lifestyle, it gave me a view of this life as an insider. I became a participant, not an observer [as before in my ministry]."

Morgan addresses the fears of life after 75: loss of health, cognitive ability, short-term memory, independence, and status. Fifty-two scripture passages, meditations, and prayers offer hope for those along this intense pilgrimage.

As one reviewer says, "Settling In speaks loudly of the continuing call of a God with hands outstretched, who is always challenging us to further horizons, larger concerns and constantly surprising us with news to love and be loved."

Morgan's soul-baring reflections are invaluable for those considering a move to a retirement community, current residents, their family and friends, and staff of facilities.

Richard L. Morgan is a retired chaplain, pastor (PCUSA), and professor. He most recently served as a volunteer chaplain at Redstone Highlands, the senior living community where he resided near Pittsburgh, Pennsylvania. He holds a bachelor of arts degree from Davidson College; a master of divinity, master of theology, and PhD from Union Theological Seminary; and a master of counseling from Wake Forest University, Richard was named the 1987 Man of the Year by the city of Lenoir, NC; awarded the 2013 Presbyterian Older Adult Ministry Award; and honored as the 2015 Volunteer of the Year at Redstone Highlands Senior Living Community.

"Richard Morgan has a passion for enhancing the lives of older adults. Upon reading his latest book, my desire is to share it with others, for it is comprehensive and 'rings true.' He speaks of his own insightful experiences in making the transition to retirement community living, with all of the accompanying challenges and joys. Dr. Morgan's narrative offers encouragement and support to those who are making this journey."
— James D. Ludwick
Chaplain and United Methodist Pastor
Otterbeing-Lebanon Retirement Living Community


"Setting In captures well the wide range of emotions typically experienced by residents in their initial years in a continuing care retirement community. The author conceals few of his feelings and criticisms, candidly describing the difficulties from a home and lifestyle of many years to a congregate care environment. Morgan's deep and pervasive theological grounding and pastoral commitment gives the book a meditative character with each of the 52 vignettes beginning with thoughtfully selected scripture and ending with prayer."
— Samuel M. Stone
Executive Director
Glenaire Continuing Care Retirement Community