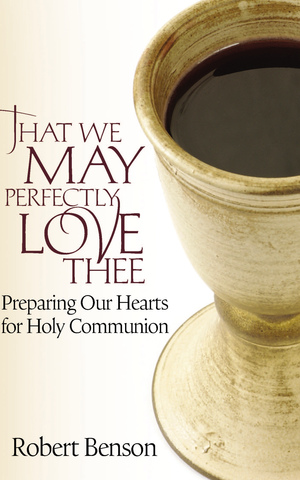 That We May Perfectly Love Thee

Preparing Our Hearts for Holy Communion

Why is it important to prepare your heart for Holy Communion?

Holy Communion (also known as the Lord's Supper, service of Word and Table, or Eucharist) is an act of worship that Christians are called to offer to God, Robert Benson believes.

"[The observance of Communion] is a critical part of our life together," he notes. "It seems critically important that we approach this act of praise and thanksgiving with some measure of reverence."

Benson invites us to take a fresh look at this central practice of Christian worship. Speaking from the perspective of a fellow worshiper, he traces the history of the Lord's Supper from its Jewish roots and the time of the early church. He sheds light on the meaning of Holy Communion for individuals, congregations, and the church throughout the world.

Benson's poetic writing conveys devotion and passion. His down-to-earth style will inspire you to reflect on the mystery of Jesus' sacrifice for all people, and how you are called "not just to think about Jesus but also to remember him" each time you partake of the bread and cup.

That We May Perfectly Love Thee includes a guide for small groups, as well as a model for a personal retreat.

Robert Benson is a writer, retreat leader, and conference speaker. After 25 years in religious publishing as a copywriter, an editor, and an executive, Benson now writes full-time. A graduate of the Academy for Spiritual Formation, Benson is also a member of the Friends of Silence and of the Poor, an ecumenical order of laypeople.

“This is an unpretentious book, simply written, truly felt. . . . It reminds us of things we have half forgotten. It opens our eyes to things we have only half seen.”
—Frederick Buechner, author of *Speak What We Feel (Not What We Ought to Say)**

“Robert Benson gently leads the reader into a deeper understanding of Holy Communion that points to the living Christ who is the host at the Table. He puts into everyday words what worshipers can experience in each part of the service. Reading this book will not only prepare your heart for receiving the sacrament but also quicken the mind and soften the heart.”
—Joe E. Pennel Jr., Bishop of the United Methodist Church (retired)
Professor of Pastoral Leadership, Vanderbilt Divinity School

“This treasury of insight is a book small enough to read in an evening and big enough to be a short course in what it means to worship the triune God in the church's diverse practice. Ever the artist and teacher, Robert Benson helps us reimagine our participation in God's radiance. He warms the heart and hearth of the church and makes you want to gather round the fire.”
—Daniel Benedict, abbot of the Order of Saint Luke
Author, *Patterned by Grace: How Liturgy Shapes Us"